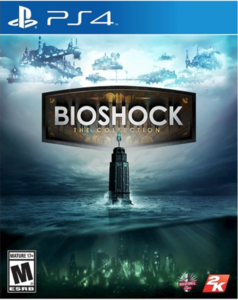 Return to the cities of Rapture and Columbia and experience the award-winning BioShock franchise like never before, beautifully remastered in 1080p. BioShock: The Collection contains all single-player content from BioShock, BioShock 2, and BioShock Infinite, all single-player add-on content, the “Columbia’s Finest” pack, and Director’s Commentary: Imagining BioShock, featuring Ken Levine and Shawn Robertson.

what parents need to know

Parents need to know that BioShock: The Collection is an anthology of three previously released first-person shooter games. Players engaging in violent, visceral combat using guns and magical powers. Blood often pours from enemy bodies as they scream in pain. Players are forced to think about weighty philosophical concepts such as rational self-interest and American exceptionalism during disturbing dramatic moments with uncomfortable scenes, including depictions of racial discrimination. Parents should also note that these games contain strong language and racial slurs, and the player's character can use alcohol and tobacco to regain health and energy.

There are yet no reviews for this product.
Back to: Birthday