$40 Fast Food Nation: The Dark Side of the All-American Meal (TAX FREE) 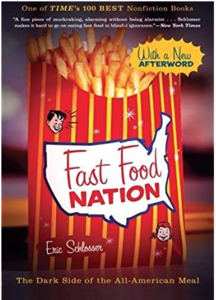 New York Times Bestseller“Schlosser has a flair for dazzling scene-setting and an arsenal of startling facts . . . Fast Food Nationpoints the way but, to resurrect an old fast food slogan, the choice is yours.”—Los Angeles TimesIn 2001, Fast Food Nation was published to critical acclaim and became an international bestseller. Eric Schlosser’s exposé revealed how the fast food industry has altered the landscape of America, widened the gap between rich and poor, fueled an epidemic of obesity, and transformed food production throughout the world. The book changed the way millions of people think about what they eat and helped to launch today’s food movement.In a new afterword for this edition, Schlosser discusses the growing interest in local and organic food, the continued exploitation of poor workers by the food industry, and the need to ensure that every American has access to good, healthy, affordable food. Fast Food Nation is as relevant today as it was a decade ago. The book inspires readers to look beneath the surface of our food system, consider its impact on society and, most of all, think for themselves.“As disturbing as it is irresistible . . . Exhaustively researched, frighteningly convincing . . . channeling the spirits of Upton Sinclair and Rachel Carson.”—San Francisco Chronicle“Schlosser shows how the fast food industry conquered both appetite and landscape.”—The New YorkerEric Schlosser is a contributing editor for the Atlantic and the author of Fast Food Nation, Reefer Madness, and Chew on This (with Charles Wilson).

There are yet no reviews for this product.
Back to: Christmas